Restoring and colouring an old photograph

For Christmas this year, I wanted to offer something special to my father.

He always had this old portrait photograph of his father, my grandad. He's posing in his Italian army uniform, back in the late 30s when he was doing his compulsory military service. He then deserted when given the chance as he didn't want to fight for the Axis, but this is another story... The picture size is around A3, it has no colours and a lot of cracks / stains. I thought he’d be nice to restore it, colourise it and frame it.

After scanning the picture, I started my work on Photoshop. First, all the stains and cracks had to be removed, to have the cleanest possible image. For that I used the clone tool and little by little, I managed to remove almost every imperfection. It took me quite a long time but I think it was worth it in the end. Good thing is that it doesn’t look particularly fixed or unnatural. Happy days.

That done, I prepared the picture before adding colours. All I did here was applying a black and white filter as well as adjusting the luminosity / contrast. I also added some overlay shadow at the border of the image, as it looked too bright.

Last step but not least, the colouring. This wasn’t as hard as I thought it was gonna be. Thanks to YouTube, I found a few video tutorials and finally settled on this process:

Lot of areas became a lot brighter after applying the skin colour. I had to accentuate some shadows by literally recreating them on a new layer, to make it look more natural and less like a painting. This was quite difficult but really needed.

Another challenge was to be accurate with the body colours: I didn’t remember exactly my grandad’s eye colour or his skin shade. I had to be very subtle when applying colours, and work changes out little by little.

Research was also part of the deal: I needed to know what were the colours of his uniform. After searching for « italian soldier uniform world war 2 », I bumped onto this picture on Pinterest: 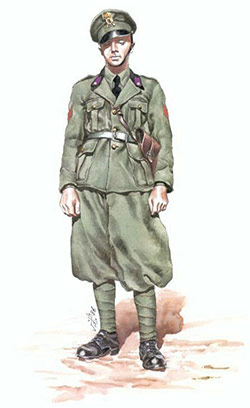 The hat and the jacket both seem identical to what my grandad was wearing on that shot. Also, the description mentions a town in North Italy: « Cuneo ». Since this is exactly where my grandad was located, I knew I was on the right path. Green hat and coat with purple decorations on the collar, so be it.

After hours of work and adjustments, I ended up to a point where I was happy with what I had done. So here is the final result:

The best reward was obviously the expression of surprise on my father’s face when he opened his gift for Christmas!